A lot more than price per pound impacts total shot blasting consumption costs. Once it is discovered that a type of blast media works well on your parts, you can begin to look at the durability of the media (how long will it last in your process), the cycle time required of the media (how long you have to blast each cycle of parts), and the many other costs involved in operating a shot blasting process (electricity, dust collection, wear on machine components, etc.).

Transmet started working with a company that was using zinc cut wire to remove flash and impart a smooth surface finish on die cast parts. The company had strict surface finish requirements from their end user and was having trouble meeting their specification.

The end user wanted surface finish to be improved. To improve the surface finish the company increased their blast cycle times. Longer cycles then led to bottleneck issues in the shot blasting step.

The company sent sample parts to Transmet for testing in the Media Support Lab. The parts were blasted with varying cycle times and different sizes of Cast Zinc Shot.

Our recommendation was replacing the 0.040” zinc cut wire with RSZ-500-ZA4 Cast Zinc Shot.

The 500-micron Cast Media is slightly smaller than the zinc cut wire, but was effective for flash removal on the castings. The smaller particles also left a much smoother surface that was well within the required specifications of the end user.

After receiving the RSZ-500-ZA4 Cast Zinc Shot, the company cleaned out their blast machine and replaced the zinc cut wire. They immediately saw an improved surface finish and reduced blast cycle times by 50%. 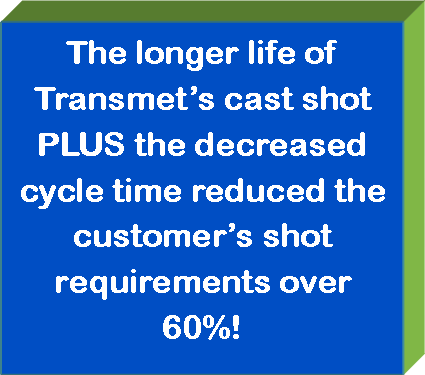 Get in touch by filling out this short form: